NACFD Patti Lewis chair resigns
4/22/18 Kingman Miner: Lewis resigns from NACFD board after appointments -- This is so typical of fire districts and I wouldn't be surprised by a similar future for LMRFD.

Unbelievable -- you either have a board of do-nothing apathetic and ignorant "volunteers" or you have one or two people kick ass and constant disputes between the doers and the morons.

THAT is why Mohave County fire districts are in constant turmoil.

Why????  Is it because they're all Republicans?

Lewis resigns from NACFD board after appointments 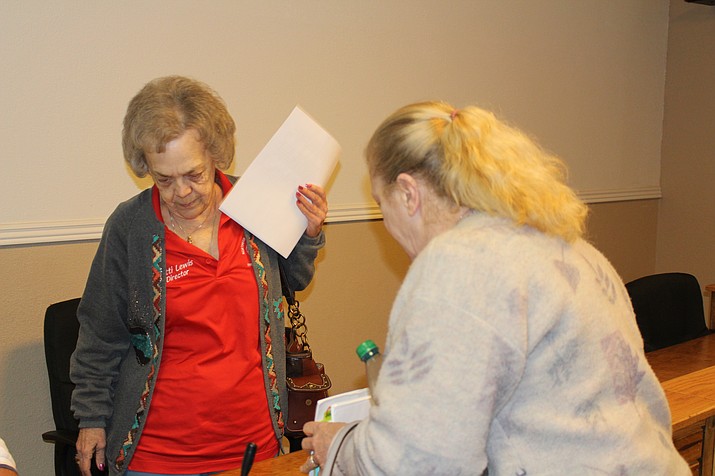 Patty Lewis, left, chairwoman of Northern Arizona Consolidated Fire District’s governing board, speaks with a friend following her announcement Thursday that she’s resigning from the board. (Photo by Hubble Ray Smith/Daily Miner)

KINGMAN – The governing board of Northern Arizona Consolidated Fire District filled two vacancies Thursday night, but now has another after Chairwoman Patty Lewis resigned her position.

Lewis dropped the bomb at the end of the meeting in which she was outvoted by board members Mike Collins and Jim Bailey in appointing replacements for Vic Riccardi and Sue Wilkin, who agreed to resign as part of their plea agreement for criminal conflict-of-interest charges.

“I’m going to Washington to help the president, so I’m going to resign my position. You’ll have to get someone else,” Lewis said.

In the first order of business, following approval of minutes from past meetings, Collins opened an envelope with letters from six people interested in applying for the NACFD board vacancies.

One of them was from Wilkin, who was nominated by Lewis to return to her former position.

But Lewis corrected him and said the judge allowed it, and Wilkin, who was sitting in the audience with other applicants, said she spoke with her attorney and there was nothing in the agreement that prevented her from re-applying for the board.

Collins nominated Erik Berg, and the vote was 2-1. Lewis noted for the record that Berg missed 17 meetings as a past NACFD board member.

“There’s no sense in me fighting with them,” Lewis told the Daily Miner after the meeting. “I’m outnumbered 4-1.”

She said the board had been abiding by 2012 rules in which a majority vote (three out of five) was need for approval of agenda items, and that if there were only three members, it had to be unanimous.

However, Lewis added that she’ll sue the fire district if it closes down the fire station she personally paid for on northern Stockton Hill Road.

Also submitting letters of interest to the board were Jerry Lucero, Danny Stutzman and Rick Veradt.

During public comment, a couple of people from the audience spoke against the appointments, one of them asking about the union putting together a “contingency plan” in case the board is disbanded. He noted that Bailey and Berg were formerly employed by the Kingman Fire Department, which is unionized.

Bailey responded that he had no idea of such a plan.

In other action from the NACFD meeting, the board approved $19,000 to repair a ladder truck following inspection, including new tires, and up to $9,000 for a pumper tanker stationed in Valle Vista.